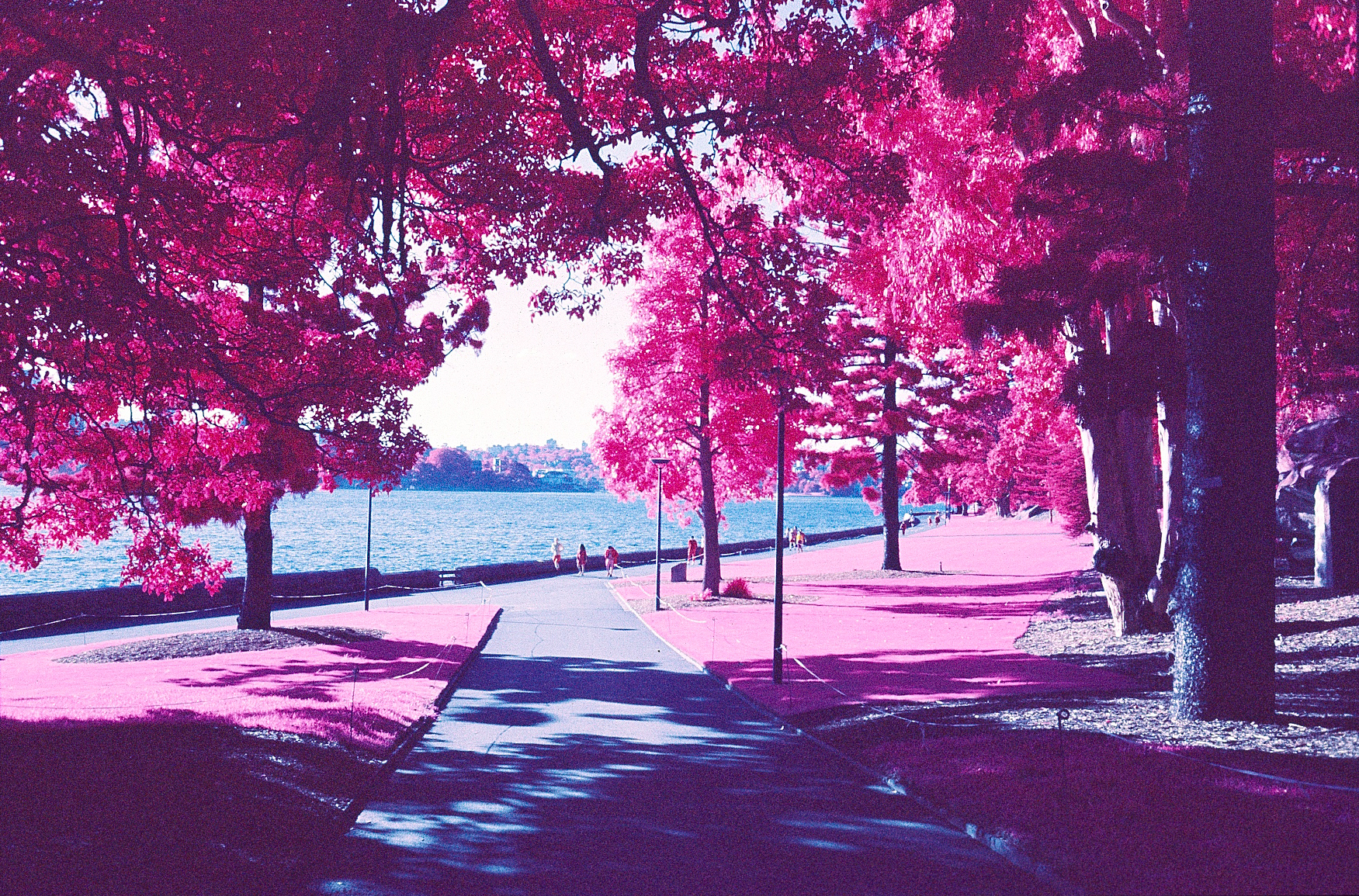 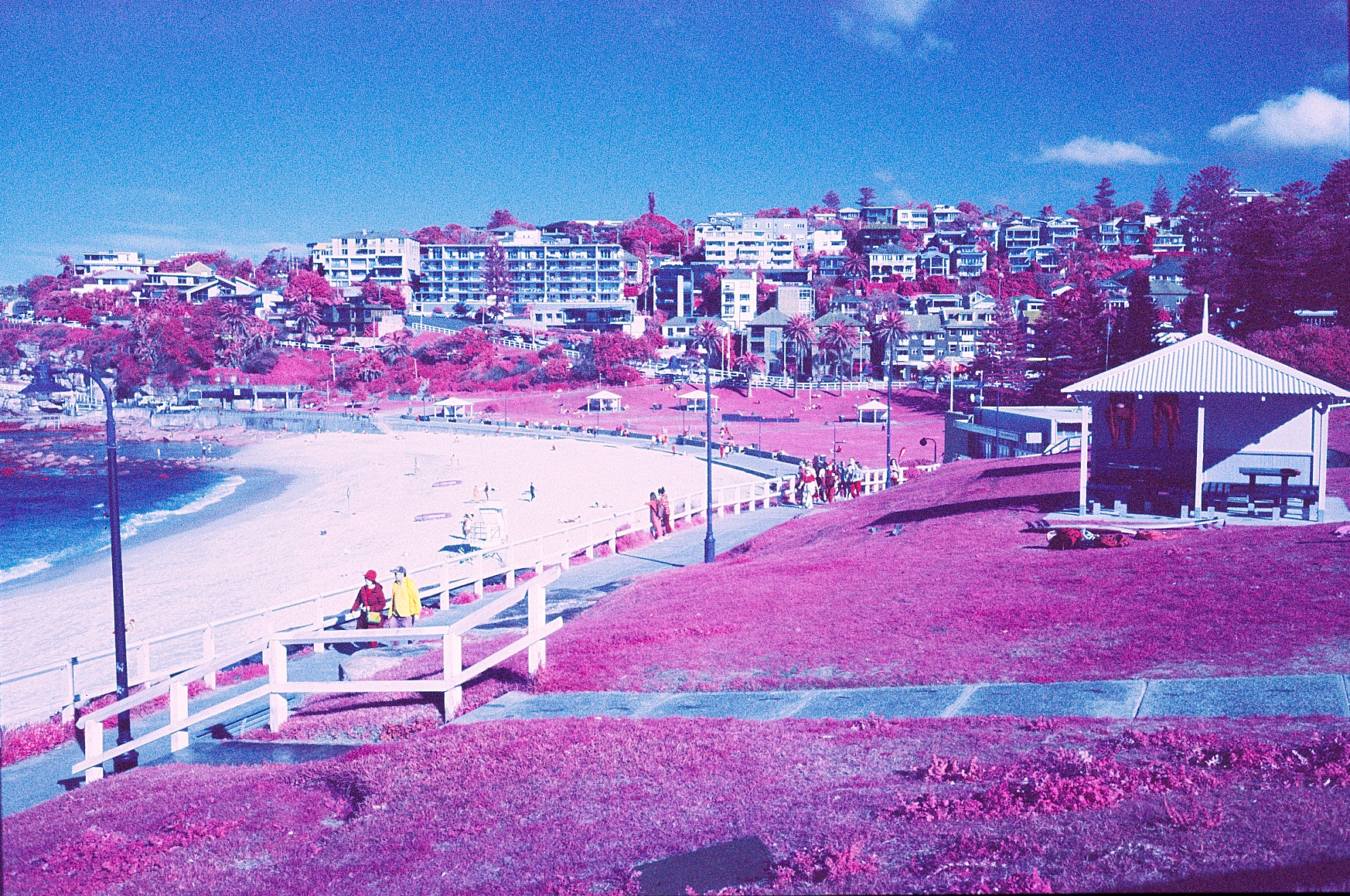 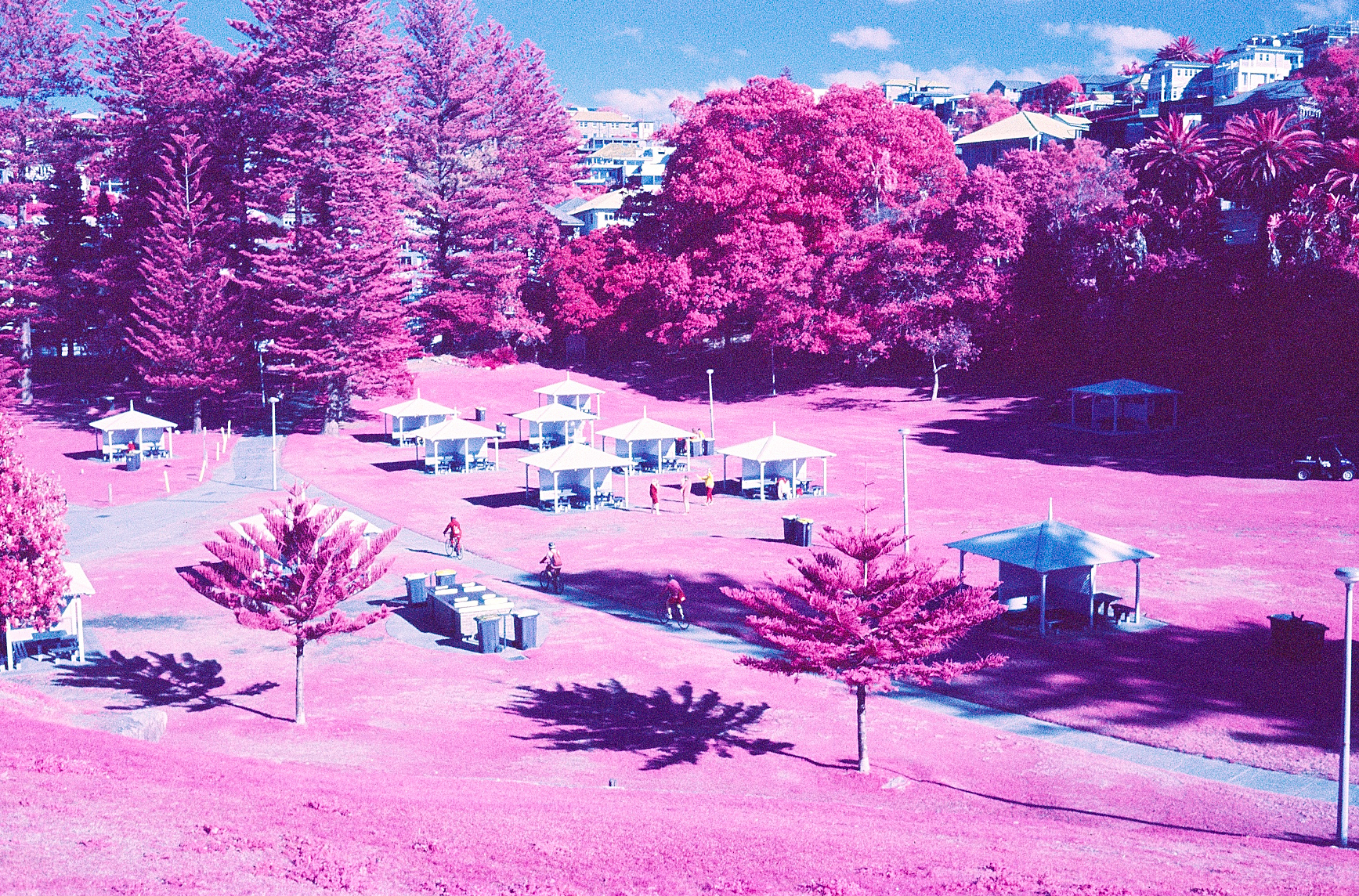 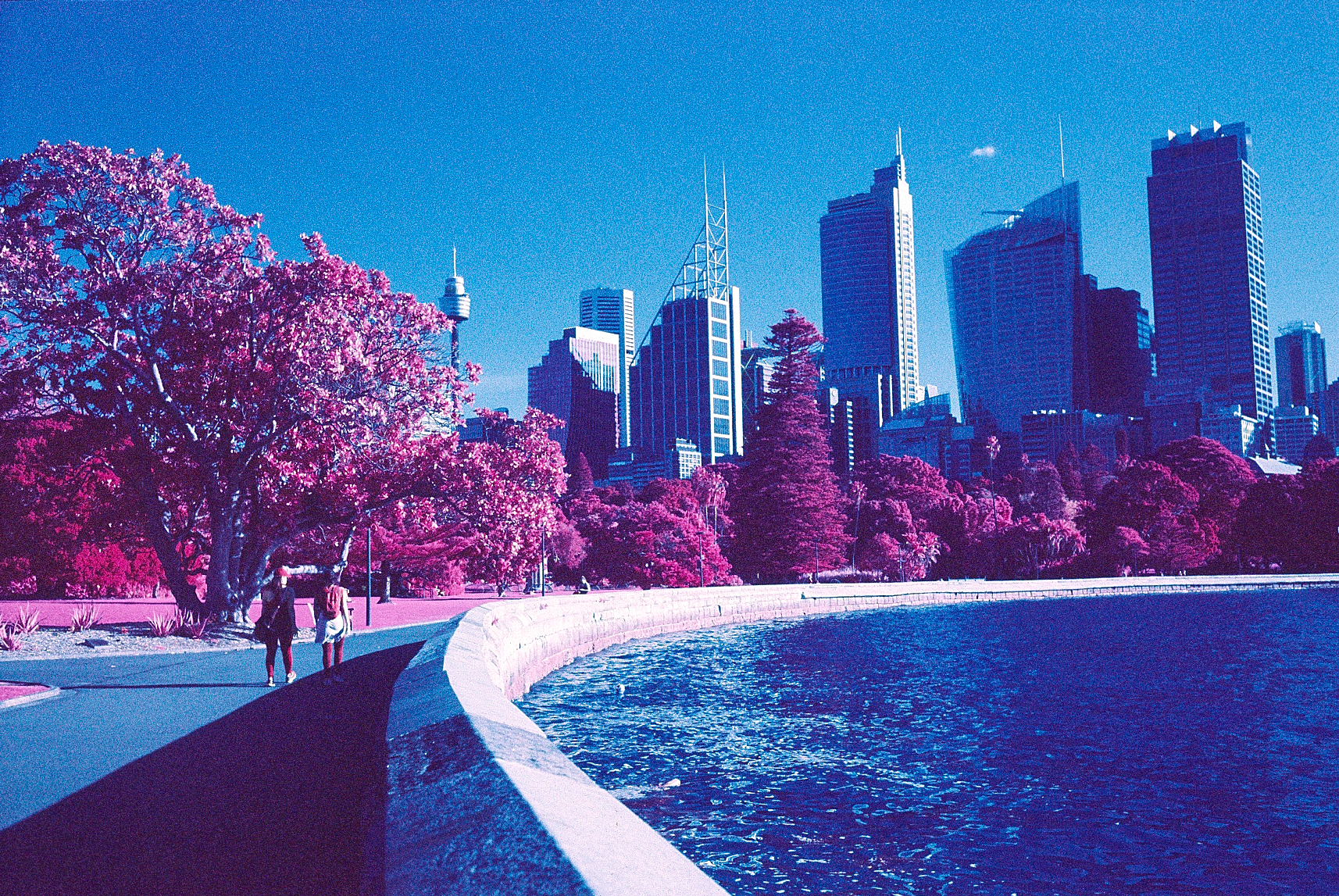 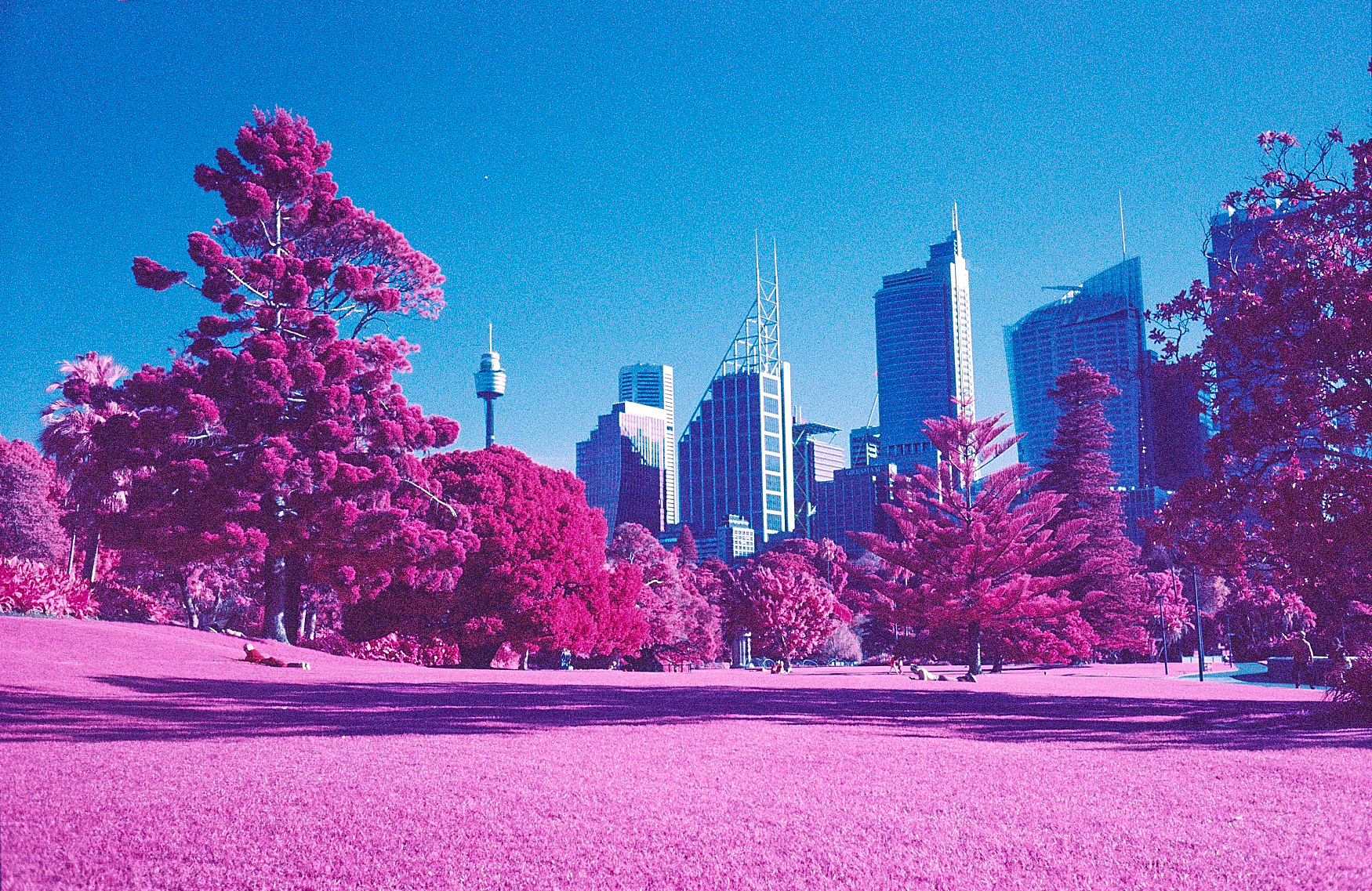 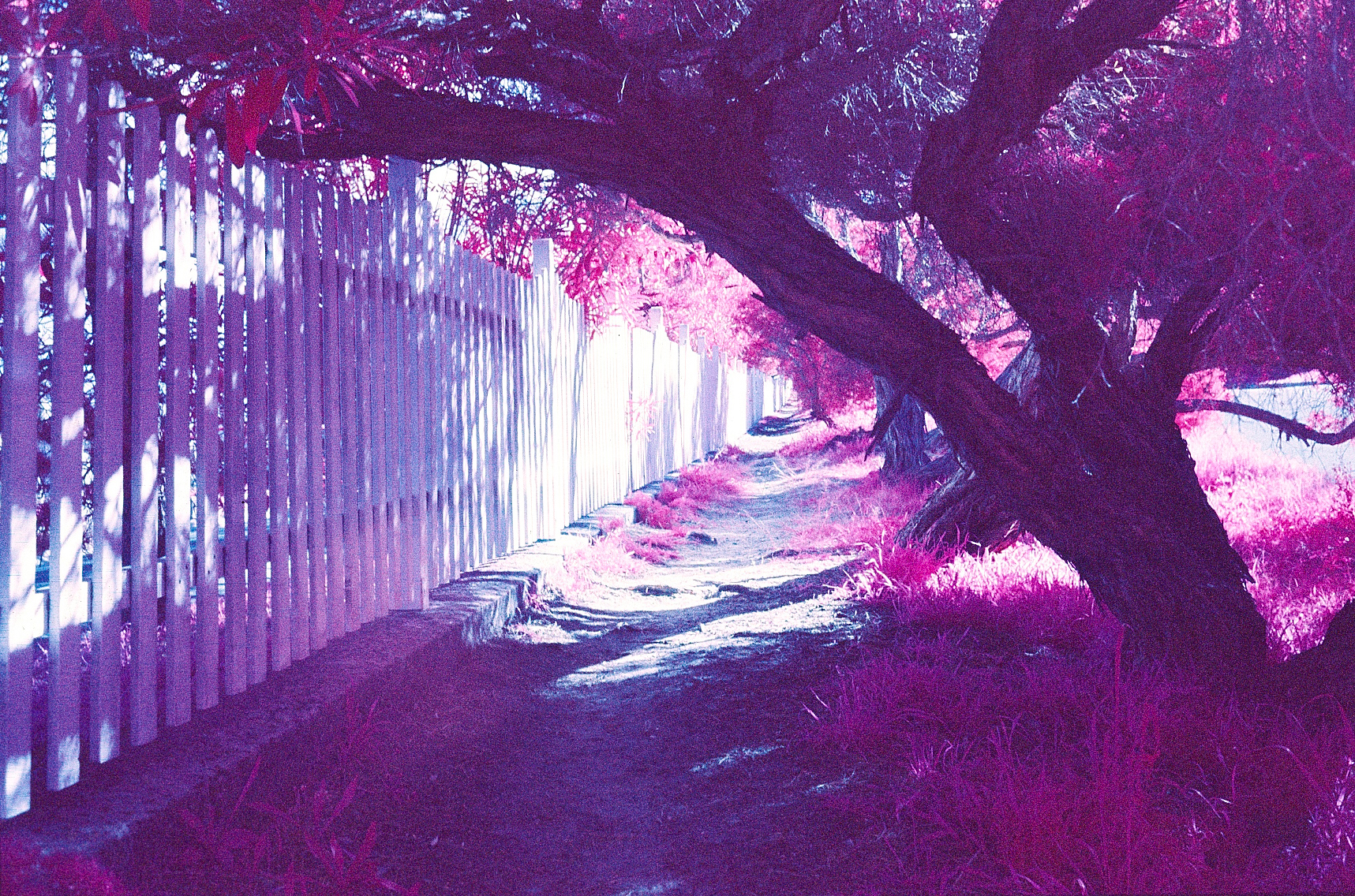 Since embracing film photography, I've heard whispers of a film stock that transforms your images into pink ethereal vistas and witnessed the excitement spread across the internet, filling film forums, facebook groups and instagram chats with the longing screams of camera geeks.

This film is of course Kodak Aerochrome, sometimes known as ‘the pink film’ and for those who haven’t heard of it - welcome out from under that rock, come forth, revel in the glorious sunshine.

Like yourself, I too was enamoured and captivated by the pink depictions I saw before me. Yet, the luscious landscapes of candy-floss trees and delicious grass valleys are a world away from the film’s original intentions. Available in 135,12o and 4 x 5 formats and designed as a military film, Kodak Aerochrome was employed in the aerial surveillance of enemy positions and first utilised during WWII. Therefore the magenta tones are not an indulgent aesthetic choice, but rather a chemical reaction separating life from death.

Infrared films were originally mass produced for use in recognisance and camouflage detection. Objects painted to imitate foliage would reflect differently on infrared-film compared to real foliage. Healthy foliage will appear in the infrared-transparency as magenta or red, whereas the painted objects would appear blue or purple. It is the presence of chlorophyll in the leaves of trees that creates the magenta infrared-reflective characteristics. Therefore foliage with higher concentrations of chlorophyll will render deeper magenta saturations than foliage with lower concentrations of chlorophyll.

Thanks to the film’s aerial surveillance capabilities; It has been repurposed and used in many areas of industry, including: Hydrology, agriculture, pollution and resource monitoring, archaeology, ice reconnaissance and forestry.

INVENTED in 1910 by a physicist named Robert Williams Wood, Infrared film didn’t become commercially available until the 1930s when Kodak developed their own emulsions. However, it wasn’t until the 1960’s when Kodak released a 35mm infrared film that it became popularised by the album artworks of musicians Jimi Hendrix and Frank Zappa. However unlike Hendrix and Zappa, Aerochrome’s popularity was ecstatic but brief, with its commercial success giving greater resemblance to that of the band Chumbawamba. Infrared photography never really ‘took off’, except on the wings of military aircraft. It was only off the back of film’s recent resurgence that professional and amateur documentary photographers poured interest into Kodak’s Aerochrome stock. Which is unfortunate, as its all too little too late; Kodak discontinued Aerochrome in 2007 following a fall in demand. As digital cameras began to shoot infrared, like all film stocks, sales were driven down meaning Aerochrome was no longer commercially viable. Kodak did produce other infrared films such as Kodak Ektachrome infrared, a variant of their Ektachrome colour-slide film. Unfortunately, like Aerochrome, it was discontinued in the early 2000’s. However, with many digital photographers recently rediscovering film, Kodak revived their Ektachrome slide film, prompting many to request a revival of the infrared variant. There was even a petition, describing in depth the incomparable colour saturation of Ektachrome infrared compared to modern day digital alternatives. Although the petition was unsuccessful, film’s popularity continues to grow, increasing the possibility of more film stocks being revived. 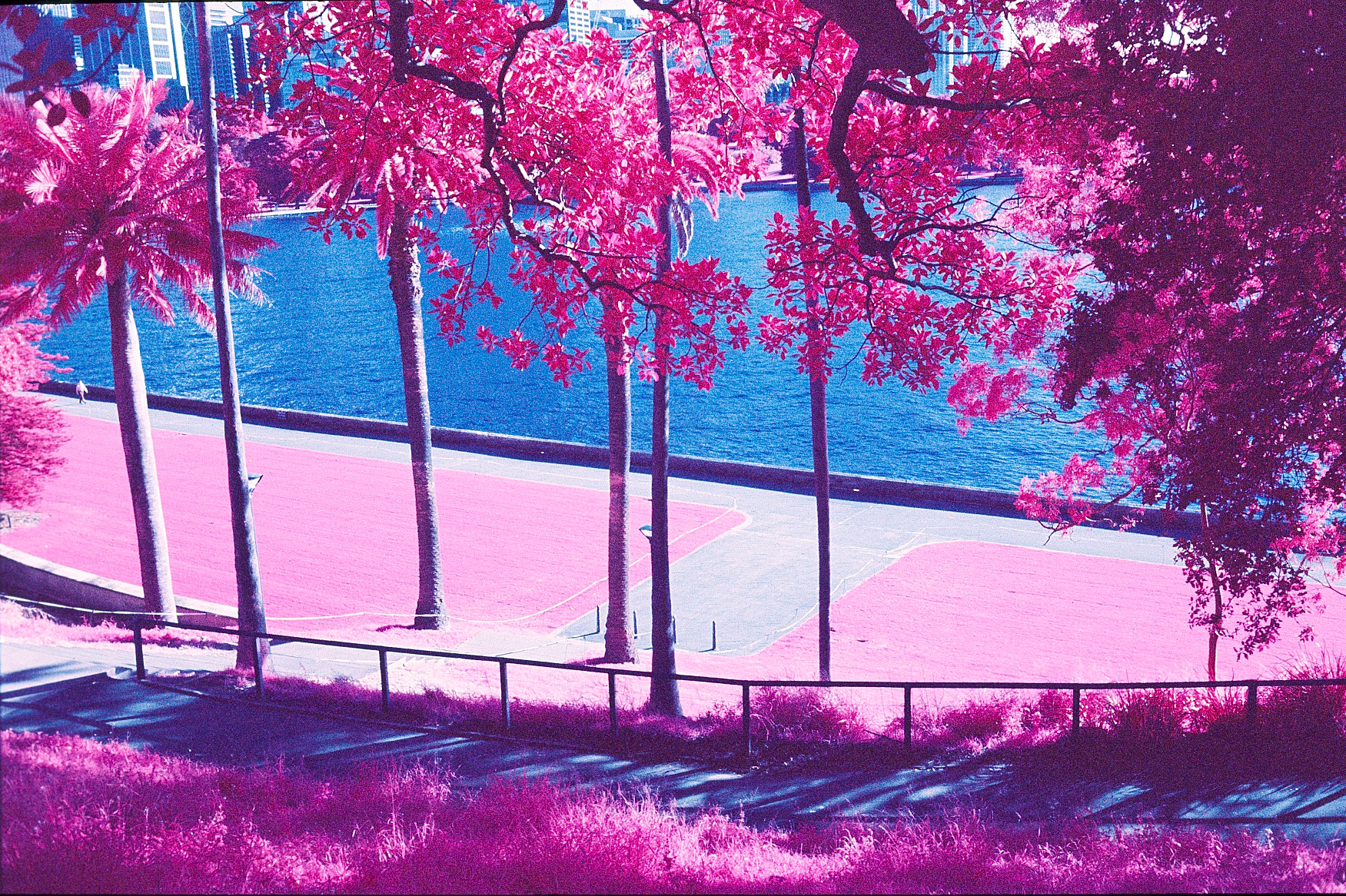 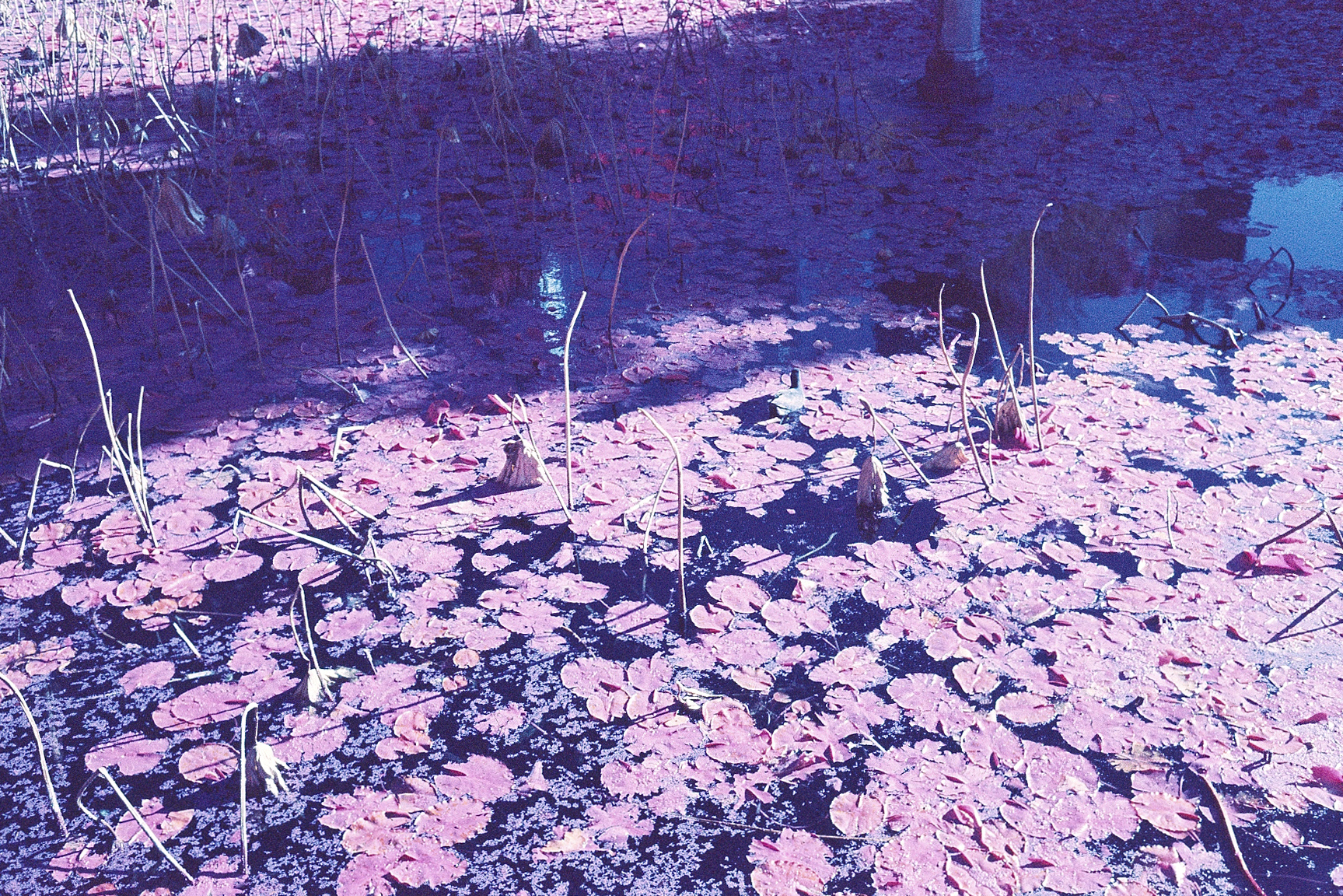 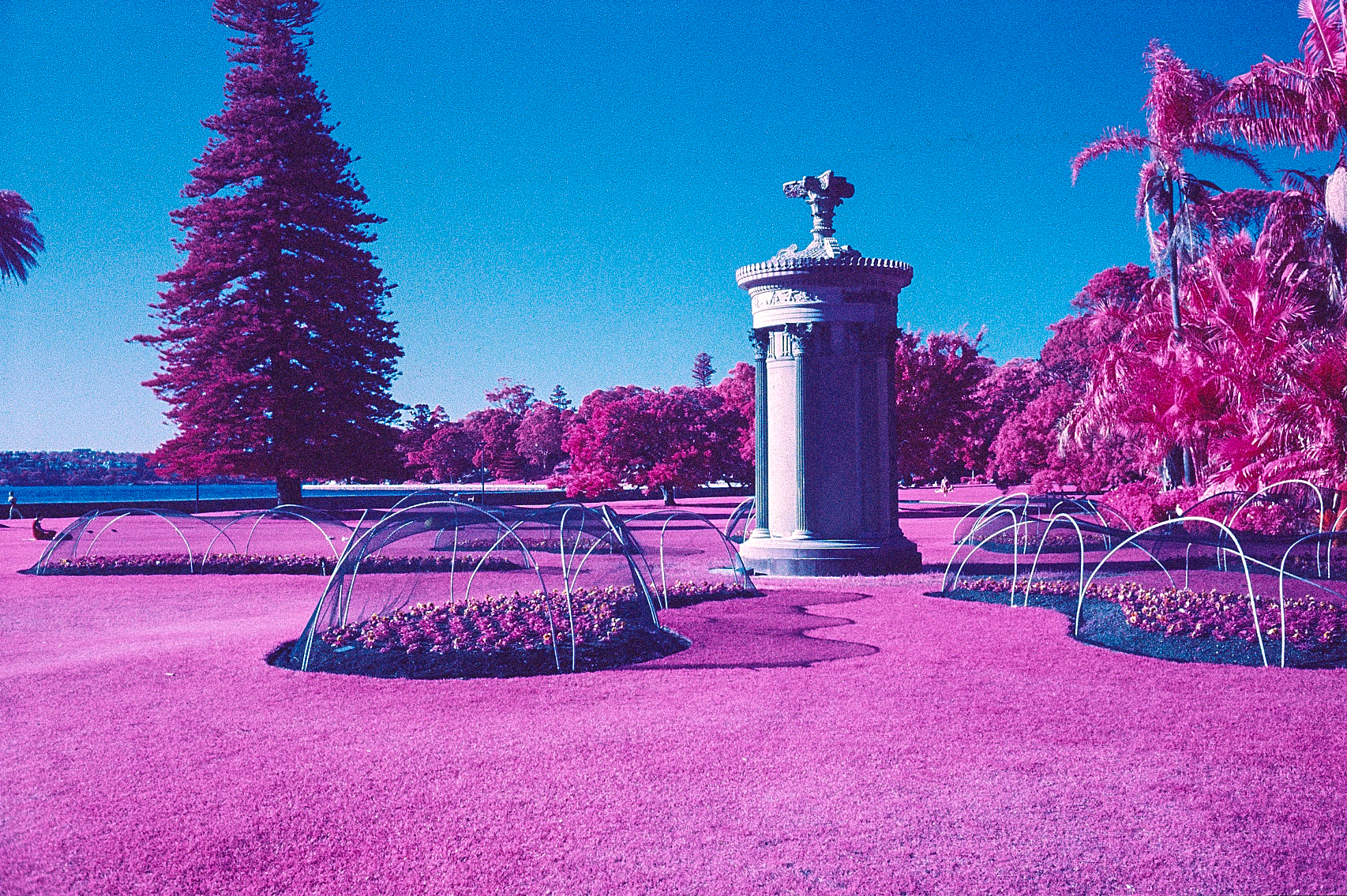 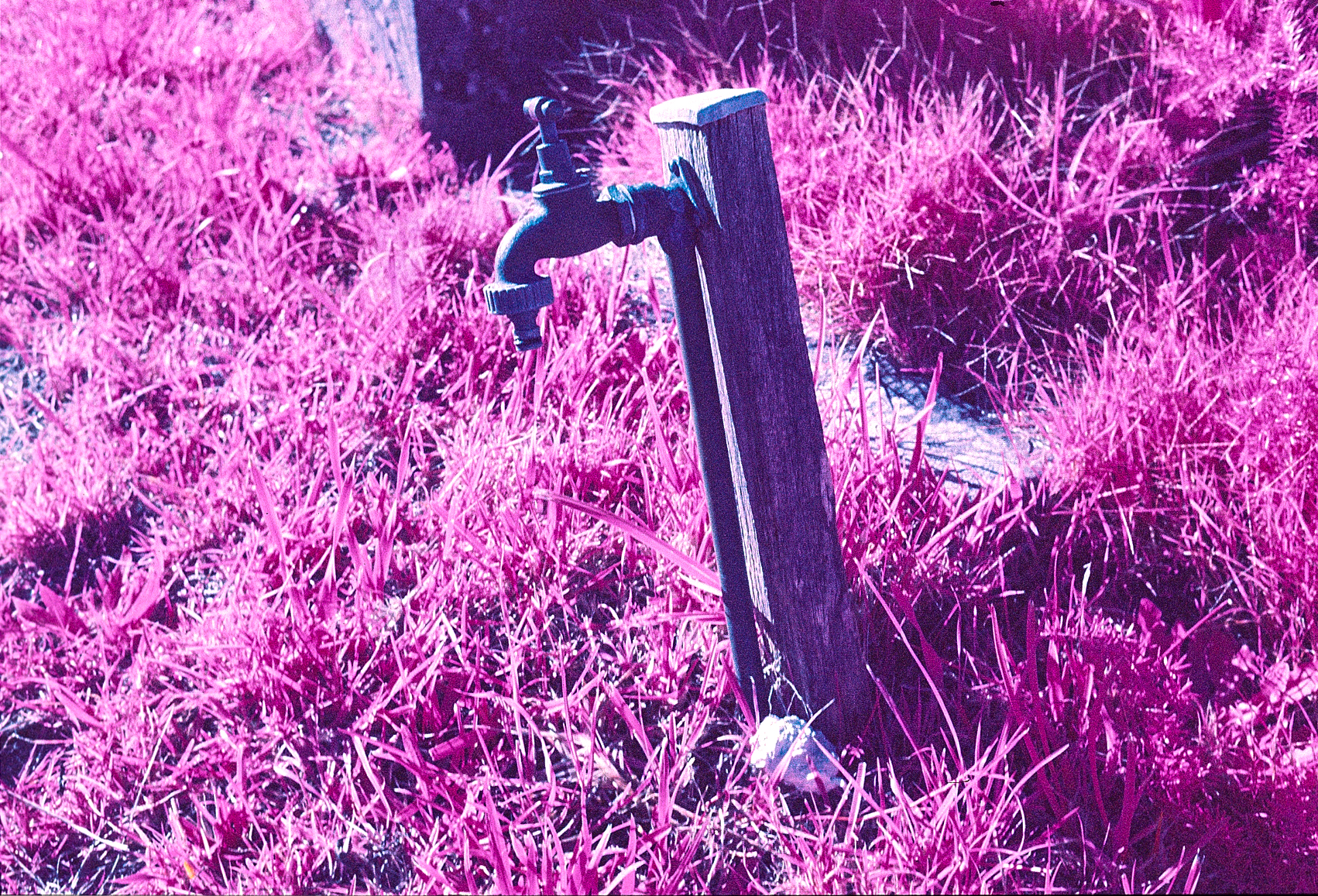 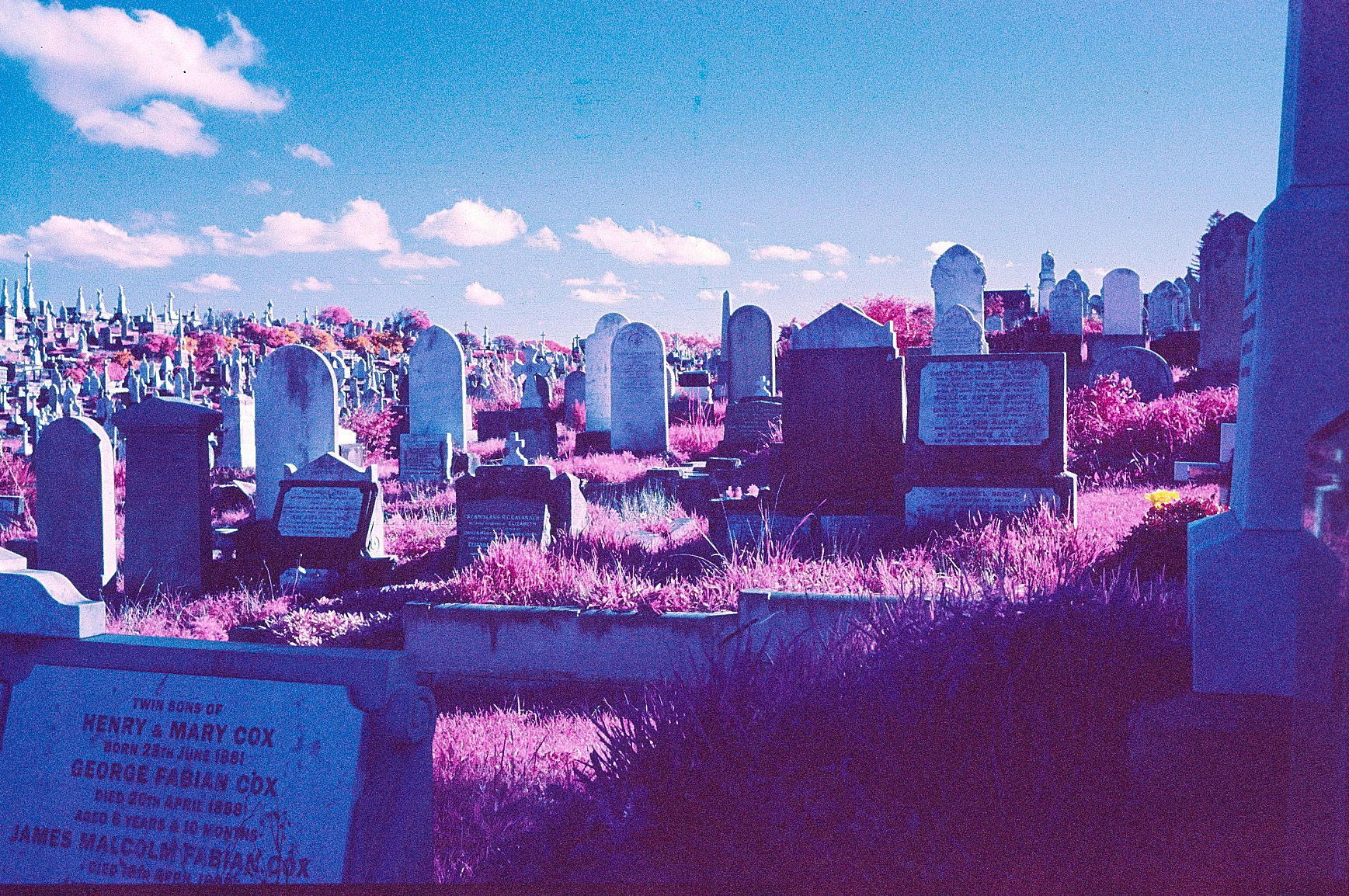 The borderline-sexual-cravings of today’s film nerds is symptomatic of Aerochrome’s death in 2007. Whilst modern day film stocks such as Lomography’s purple achieve similar results, the hype for Aerochrome remains unmatched, due largely to its rarity. Furthermore - except for Ektachrome infrared - no other film stocks truly emulate Aerochrome’s magentas and in the hands of photographers such as Richard Mosse, aerochrome’s aesthetics have been utilised to novel effect. Mosse uses the beauty of aerochrome’s rendering to bring attention to the humanitarian disasters occurring in the Congo. The juxtaposition between death and the colour pink is at once troubling and confusing, challenging our perception of what is beautiful, what is horrific and how these images could and should be disseminated.

Unlike Black and White photography, we seem unable to embrace the pink spectrum into our everyday. Once the shock of the new has subsided, I find it hard to justify the pink pandemonium that surrounds Aerochrome. Instead, all too often, I’m left with a hollow sense of satisfaction, hungry for the next gimmick to digest.

Admittedly, it’s hard not to fall into the trap of desiring the unattainable. It’s been over a decade since the Aerochrome was discontinued, which means that if by some miracle you do manage to procure a roll, the chances of it having been stored correctly and working effectively are very slim. On top of this, you’ll have to sell a kidney just to afford it.

Although, I wouldn’t go out of my way to buy another roll of Kodak Aerochrome, if the opportunity fell into my lap, I’d grab it with both hands. Regardless of whether the film had legs or was always destined to failure, I’m not blind to the fortuitous position its discontinuation put me in and when it comes to shooting, I feel very lucky to be in the haves, not have-nots. It is a truly unique film that can produce authentic imagery, and its history is part of its charm. To the friend who sold me the roll in-a-bulk-buy deal of the century- thank you, thank you, thank you.

In my eyes, Aerochrome is an undeniably beautiful stock - and if it was more readily available - justifiable of a spot in your kit bag. However by design, it was never meant to be an everyday staple, and the power of its pink display does ultimately wear off. It’s hard to compare it to Kodak’s other stocks such as Portra and Ektar - both beautiful in their own way - but in death, Aerochrome’s legendary status is secured, and it appears most things do in fact, look pretty in pink.

For anyone fortunate enough to get their hands on a roll of Kodak Aerochrome, there are a couple of things you need to know before its unboxing.

An explanation of Colour Infrared films and filters from the Kodak website:

If the colour of the dye formed in a particular layer bears no relationship to the colour of light to which the layer is sensitive—if the relationship is not complementary—the resulting colours are false. False-colour films can be used to emphasise differences between objects that are visually quite similar. Figure 1 demonstrates how colours are reproduced falsely on KODAK AEROCHROME III Infrared Film 1443.

As indicated in Figure 1, all three layers are inherently sensitive to blue radiation. To limit the exposure of each layer of coloUr infrared film to only its intended spectral region, a yellow filter (minus blue), such as a KODAK WRATTEN Gelatine Filter No. 12, is always used over the camera lens. With the yellow filter in place, the layers act as though they are sensitive only to green, red, and infrared (all blue radiation is absorbed by the filter). The grey areas in the top portion of Figure 1 illustrate exposed areas of silver halide from each of the spectral bands reflected from the original scene. Thus, three separate negative silver records are formed

Surfing The Bombie During Lockdown